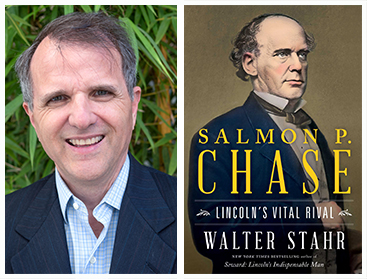 A two-time winner of the Seward Award for Excellence in Civil War Biography, Stahr sheds new light on Salmon P. Chase’s work as a leading advocate to end slavery and secure Black rights, before and after his time in Lincoln’s cabinet and as Chief Justice of the United States. Hailed by experts as “sweeping, meticulously researched, and convincingly argued,” much of Walter’s research was done at the UCI Libraries.

Bring your own copy or purchase a copy of Salmon P. Chase: Lincoln’s Vital Rival at the event.

Refreshments will be served.

Walter Stahr is the New York Times bestselling author of Seward: Lincoln’s Indispensable Man, Stanton: Lincoln’s War Secretary, and John Jay: Founding Father. Stahr practiced law in Washington and Asia for more than two decades. He is an honors graduate of Stanford University and Harvard Law School. He is the son of Elizabeth Stahr and the late John Stahr, who received the UCI Medal in 2003 for their many contributions to the university.